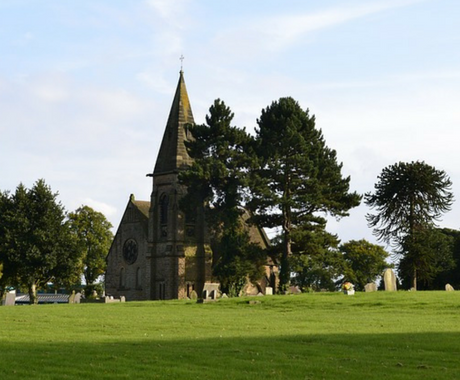 Britain’s oldest tree is believed to be an ancient Yew that resides in a Welsh churchyard. It is estimated to be more than five thousand years old, which means it was planted 3000 years before Jesus Christ was born.

Not every churchyard has such an old specimen, but it’s not uncommon for churches to be the home of historical trees.

The Tandridge Yew in Surrey, with a girth of over 10 metres and noted in Thomas Pakenham’s book ‘Meetings with Remarkable Trees’ is one such notable tree.

Another is the Yew in the cemetery of the St Andrews Church in Buckland, Dover where complaints are recorded as far back as the sixteenth century about branches overhanging the west end of their church, which ‘hurteth the church by dripping’.

In the UK a land owner in which a tree stands has a duty in relation to the health and safety of those on or near the land. This duty is covered by both civil and criminal law and would leave the owner responsible for any liabilities arising from the falling of a tree or branch either financially or through prosecution (NTSG, 2011).

The combined factors of mature trees and the usually open access of churchyards, means that churchyard trees require a frequent inspection regime.

It is far better to preserve these trees through regular surveys and maintenance rather than deal with the aftermath when a tree fails.

On occasions this is unavoidable, which was the case when a mature Cedar fell in the grounds of Christ Church, Esher during the high winds brought by Storm Katy in early 2016, which gusted up to 100 mph in some parts of the UK.

When Connick Tree Care undertakes tree condition surveys within churchyards, we firstly assess, identify and plot all of the trees on site. Next we produce a report of our findings, this includes a list of trees that require maintenance and prioritises the urgency of the work, generally between 3 – 12 months.

Our reports also provide a recommended re-inspection frequency based upon the usage of the site, typically every 3 years and a long term management plant.

This allows for the church council to plan for the work, identifying implications for revenue budgets over a period of 5 to 10 years of tree management.

The survey also identifies any trees covered by a Tree Preservation Order (TPO). Any work to these trees will require the necessary consent from the Local Planning authority.