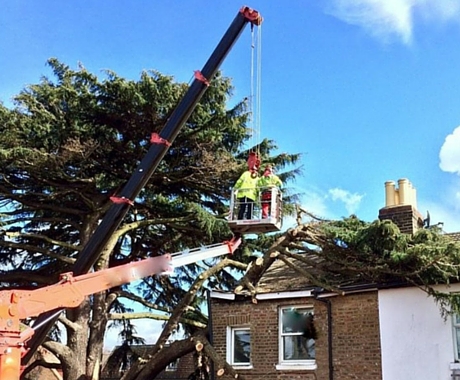 When Russell Gibbons, Senior Tree Officer at Elmbridge Borough Council, returned to work after the Easter long weekend he was confronted with the aftermath of Storm Katie.

A mature cedar in the grounds of Christ Church, Esher had fallen victim to the high winds, which gusted up to 100 mph in some parts of the UK.

The damage was huge. An extremely large main lateral branch had failed and fallen into an adjacent building. The branch had crashed into the end of terrace house, embedding into the gable end wall and roof.

Thankfully no one was in the building at the time. The top floor flat is empty and the ground floor is used during the day by a business.

Russell immediately contacted Dan Pennington, Senior Manager at Connick Tree Care. By lunchtime Dan had inspected the site and devised a plan to make the tree and surrounding area safe. This was no easy task, especially as a tracked crane and MEWP (mobile elevating works platform) would be required.

During the remainder of Tuesday Dan quickly organized the equipment and was back to Christ Church early the next morning with four skilled arborist from the Connick team.

Dan said, “This was a highly delicate and complicated operation. We started by removing the upper branches from the roof, but I was extremely concerned that the wall of the house could collapse as we removed the remainder of the main stem.”
Dan continued, “It was a slow operation with every step taken with considered caution. Thankfully we were able to remove the failed limb without further damage to the building.”

The whole procedure caused quite a spectacle, with local residents coming out onto the street to observe and take pictures and video.

Once the emergency was dealt with Russell Gibbons contacted Dan Pennington to say, “I would just like to thank you and the teams that were involved with the clear up of the Cedar limb that fell into the neighbouring building at Christ Church. I was very impressed with the speed and professionalism of your teams and your response on both days. Communication between both parties was excellent meaning all those involved were kept well informed.”