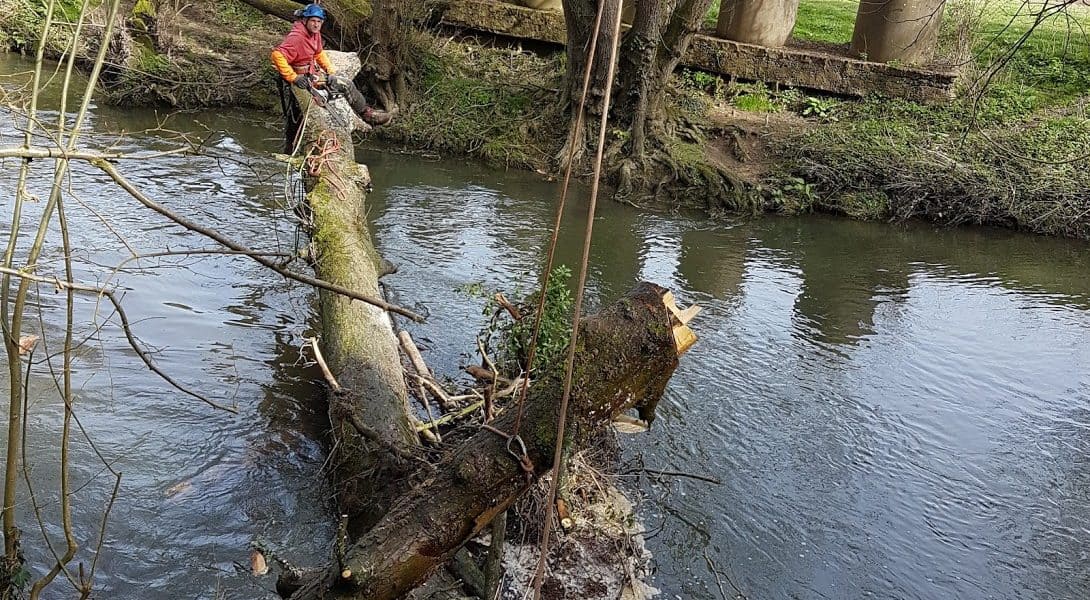 Removing a fallen tree across a river at the end of your garden is not usually at the top of the list when you obtain a new property. This, however, was a priority for a new owner of a property in Pixham, near Dorking.

It was thought that the large chestnut tree, that spanned from one side of the River Mole to the other, had lain like this for many years. Unsightly debris gathered around the trunk to be dispelled as the level of the water rose.

It was time for the river to be cleaned up. This was not a simple task. Connick Tree Care was engaged and the careful planning began.

Firstly, a risk assessment was carried. Health and safety of our operatives is paramount. In addition to the protective clothing including helmets and ear defenders, which is mandatory for any job, waders and buoyancy jackets were worn.

Access to work on the tree was restricted. Heavy lifting equipment was needed. To maneuver the telehandler a dead fruit covered in ivy had to be removed to provide space for the telehandler to be positioned on the river bank.

Safety ropes were used to secure Lee Chester, a qualified tree surgeon with 15 years’ experience, to a tree on the opposite bank.

As Lee cut the chestnut in stages, ropes were attached so that Neil Gosling controlling the sections could slowly lift and place on the river bank. Using a professional chainsaw, the segments were further cut into smaller, more manageable lengths.

The operation to remove the fallen chestnut tree from the River Mole took 5 hours. The site was left clean and tidy and the river flows freely for the first time in many years.